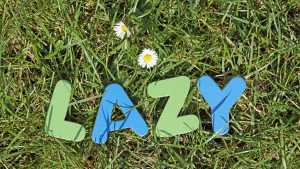 Jean said – “Your Killer Clearance Sale has worked like magic for us! My team loves it. We have moved so much inventory and made lots of money from it.”

“That’s great Jean. I am so happy to hear that!” I replied.

“But Cathy I have another problem. What can I do RIGHT NOW about merchandise that has already run it’s course? Ha! Not to mention the items that never even showed up to the starting line to run. Oh man – I bought some lazy stuff!”

I burst out laughing. Then realized that at this point in the year many of you probably have the same problem. Right?

It’s those great items you received in January or February that are still sitting there. Those lazy bums! Let’s move ‘em out.

What to do? The first thing to do is to call the vendor or your sales rep and see if you can exchange them out for something that you think would sell better. Sometimes, what hasn’t sold for you has sold well for others and they are happy to take it back! (Be sure to ask if they will cover the return shipping too.) If you don’t try – you will never know. As Wayne Gretsky says, “You will miss 100% of the shots you don’t take.”

Challenge your team with a game to move it out. Offer them the equivalent of a 20% markdown to move those slow lazy items! For example, tell your team that if they sell a total of 5 $50 items, then they get a $50 Gift Certificate to use in the store! You team has to mention it to each and every customer that comes in the store.

I used to also leave these featured items on the counter. Then when a customer was making a purchase, I’d have to move it off the counter and had the perfect opportunity to say, “Hey, have you seen this?”

Support your team by sending out an email highlighting the items. Have quotes from your team about why they like them. And post complimentary items with them – so that they have the opportunity to cross sell items too. Have each member of the team post a pic of their favorites on social media.

Next, for the lazy inventory take a small in-season markdown. It only has to be 20%. Get your red pen out and write out the sale price on the tag. You can leave the item merchandised right where it is. If the items have run their course, don’t hesitate to take a deeper markdown.

If you find that you have a fair amount to move out, then you can run a “Spring Cleaning” sale. The strategy about this sale is a bit different then the Killer Clearance Sale strategy. These items will likely appeal to your best customers more than just your sale raving fans. So be sure to look at your list of top 100 raving fans and if they haven’t been in recently then use this as an excuse to call them. Say, “Hey, we haven’t see you in awhile – there is so much in new and some of that line of XYZ you like is on sale!”

Send out an email talking about the sale only. Post photos of items that are on sale in the email and every day on Facebook. Be sure to include accessory items with them. You want the items to look as attractive as possible. Group them all together in the front of the store for 5 days only. Then move them to a permanent sale area.

These action steps will get rid of the items that have run their course as well as the lazy ones!