I HATE FAILURE.
I LOVE SUCCESS 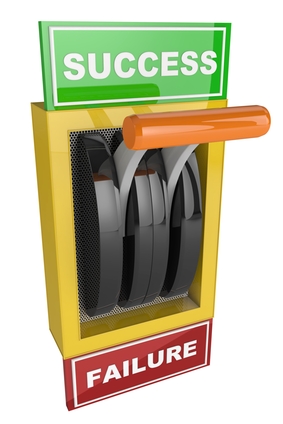 It is essential for every person who is serious about achieving significant personal and business growth to work with a coach. That is a fact. You can’t do it on your own. In a meeting in January, my coach and I developed an action plan that included the execution of this one particular activity. Everything else stemmed from that. I agreed to it. It didn’t look scary. It didn’t seem so big. But I had a heck of a time executing it. I couldn’t figure out why.

It was so hard that I really fell into a deep hole of anxiety about it – which made accomplishing other work very difficult. I sat in that hole and couldn’t figure out what the heck the problem was. It just didn’t seem so difficult – but I was totally stuck. I couldn’t move.

I came to realize that my hatred of failure stopped me dead in my tracks.

My big a-ha moment was recognizing that I was actually deathly afraid of failure.

As my coach guided me through this I saw clearly that it is because I am afraid failure will make me look “less than”. Do you know what I mean? I will look less than perfect…less than successful. It is much more fun to look successful! Even if it is a lie.

When God wants you to get a message, He will send it to you multiple times. Often, I get hit on the head with it! That is certainly what happened to me.

First, my coach and mentor kept challenging me. I kept telling her that she was wrong. Fear of failure isn’t my problem I insisted.

Next, I read “Managing Yourself: The Paradox of Excellence” by Thomas DeLong and Sara DeLong published in the Harvard Business Review. I’m excellent, right? So I read it. 🙂 “High achievers often let anxieties about their performance compromise their progress. Because they’re used to having things come easily to them, they tend to shy away from assignments that test them….They have successful images to preserve, so instead of embracing risk, they hunker down …at the expense of personal growth.”

At first I dismissed this point. I like to learn new things. I don’t care what people think of me.

But then why was I so anxious? This had to be true. And it is. I know that I don’t like to fail and so I don’t test myself. “First, you have to take a hard look at yourself and identify the forces that escalate you anxieties and cause you to turn to unproductive behaviors for relief…you must adopt practices that give you courage to step out of your comfort zone,” the DeLongs report.

Unproductive behaviors that give me relief…..does that mean Facebook? Playing Drop7 or Words With Friends on my phone? Watching TV too long into the night? The truth was right there. I couldn’t ignore it.

Then, I was talking to my friend and accountability partner Karen, who challenged me about not following through. (Accountability partner? Yes, it is imperative to have support around you when you have big dreams.) “What are you afraid of? Are you afraid you aren’t good enough to do this? Really? After all the success your clients have had over the decade of consulting you have done?”

“Yes,” I said. I finally stated my truth.

The DeLongs report that “It’s hard to exorcise past demons until you have looked at them dispassionately from multiple points of view. Almost without exception, overwhelming feelings of inadequacy are in our own minds.”

I reviewed the events that I considered failures. I found that in EVERY instance I had delivered what I promised. Unfortunately, it was the client that hadn’t followed through. That happens – so I realized that the failures weren’t really mine. And other items that I had considered failures at the time…now with perspective I see them differently. Big Lesson!!!

The final message from God came via Derrick Rose! While watching the Chicago Bull’s first game against the Miami Heat last year, I saw the statistic that 31 of their 103 points came from second chance shots. Nearly a third of their points came because the first shot failed and they tried again.

I can do that. I can embrace failure and try again and then succeed.

I had failed to reach my sales goal. I was mad. I realized that I could have blamed my coach. There were many factors I could have pointed to. But really the problem was that I hadn’t followed through on our action plan. I had stalled. If I hadn’t worked through this issue I would have stayed stuck. She hadn’t failed….I had to exorcise my demons.

“To achieve continued success, you must open yourself up to new learning experiences that many make you feel uncertain at best and incompetent at worst. Remember that those feelings are temporary and a prelude to greater ability,” the DeLongs write encouragingly.

The bottom line is that I broke my new venture down into steps and have met with much greater success than I thought! I blew my sales goal out of the water!! YAY!! It all comes from my passionate desire to help retailers like yourself get more profit and love your life. Just wait until you see all I have planned!

Here’s the thing, I got through all of this with help. If I didn’t have that help, it is likely that I may never have gotten to this point which has not allowed me to thrive in my business at a bigger level. If your first shot didn’t make it through the hoop and you are ready for a second shot with some help, contact me at cathy@retailmavens.com. Let’s do a VIP day together.