Now is a terrible time to be in retail.

More than 2,800 retail stores have closed this year through mid-April.  That is more closings than during the entire year of 2016.  At this year’s rate, more stores could close in 2017 than during the recession of 2008. 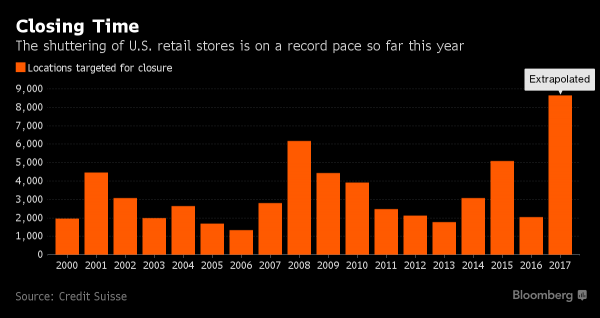 And the future doesn’t look much brighter.

The Bubble Has Burst

“Our industry, not unlike the housing industry, saw too much square footage capacity added in the ’90s and early 2000s. Thousands of new doors opened, and rents soared. This created a bubble. And like housing, that bubble has now burst,” Urban Outfitters Chief Executive Officer Richard Hayne told the Wall Street analysts. “We are seeing the results — doors shuttering and rents retreating,” he said. “This trend will continue for the foreseeable future and may even accelerate.”

I have been saying this for years.

I saw it happen where I live.  First, the big mall went in and killed the downtown.  Then it got hit by a double whammy and is dying itself.  To the east, a 600,000 square foot lifestyle mall went in 6.5 miles away.  Meanwhile, 7.1 miles to the west a major thoroughfare became extremely built up.  Strip malls and standalone stores are up and down that road.

Too many stores were built, and that’s caused an explosion in retail space. The U.S. has far more square footage devoted to retail per capita than any other country – 50 percent more than in Canada and six times the amount of our European and Japanese counterparts.

The worst thing is that every grouping of stores looks the same. There are 4 Home Depots within about 21 miles just on that stretch of road. Maybe there are two independent retailers there.  The lifestyle mall has a couple of furniture design stores that are independents.  But nothing else.

No way do we need this many duplicate stores.

Every independent blames Amazon.  It is one factor. That online giant accounted for 53 percent of e-commerce growth last year.  All the pundits talk about the significant sales from malls and chain stores that Amazon took away.  Every retailer reading this has experienced showrooming and knows that Amazon has stolen business.

Here Is How We Ride The New Wave

There has NEVER been a better time to be an Indie retailer.

In April 2017, Cowen, a financial company specializing in equity research, released a report that shows that customers still prefer to shop in physical stores 75 percent of the time.  Read that again.  75 percent.

There are so many opportunities for independent retailers to shine. But there will still be more store closures as weak indies fail.  Don’t let that happen to you.

If you want to retire, sell your store or try something new, then do that. Don’t let your store hold you hostage.  Life is too short for that. “Oh Cathy, you don’t understand my situation.” True.  But I have been through it many many times.  Reach out because we do this all the time very successfully.  There is a science to leaving retail with the most cash in your pocket too.

If you decide to strengthen up your store, cheers to you! Your people and community need you now more than ever.  However, passion doesn’t pay your bills or give you a raise.  So you have to start with your numbers because that is the language of money.

Your single largest expense is your inventory. How are you controlling that? Do you have an Open to Buy?  That is a budget that tells you the exact amount of money to spend precisely where. It is the easiest way to significantly impact your cash flow because you are managing your cost of goods.

Is your Open to Buy an actual Merchandise Plan that includes 90-day trending? This is life changing – well at least bank balance changing.  It takes into account how the sales of each class of inventory have been trending and corrects the amount of merchandise that you should order.  Does it perform sales forecasting with 93% accuracy?  This matters to you because you can take advantage of upward trends and not miss out on sales because you under inventoried.   Also, you have a powerful heads up if a class is starting to fall so that you can fix it right away.

In the weeks to come, I will share more actions you can take.

But this is the one that gives you the most bang for your buck – and the most bucks for your work.

If you want more information about Open to Buy and Merchandise Plans, let’s chat.  No pressure – let’s get your questions answered. Click here

Then when you go to your next trade show – you won’t be guessing.

Wouldn’t that be great?!